Museum founder Gil Mangels poses with the oldest of his many, many motorcycles.

Inside the front door of the Miracle of America Museum there’s a sign: “In the 200 years since the Constitution was established, Man has gone from the walking plow to walking on the moon.” 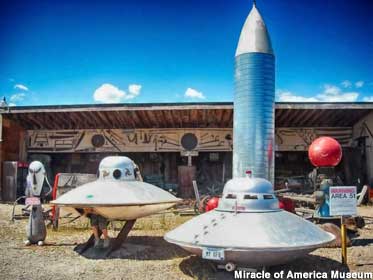 Rockets, aliens, and flying saucers built by Gil out of old satellite dishes.

“That’s kind of a miracle,” said Gil Mangels, the museum founder, who attributes this burst of innovation and advancement to America’s hands-off government, Divine inspiration, and free enterprise system.

Gil feels that the best way to show the miracle is to show visitors to his Museum as many American things as possible. The frenzy of productivity on display includes over 100 types of antique mousetraps, a battalion’s worth of military hardware, and an exhibit of dozens of differently-styled cast iron tractor seats.

“Compare what we’ve done in America with other countries that didn’t have a free enterprise system,” said Gil. A farmer and machinist by trade, he’d always been a compulsive collector, but in 1963 he took a trip to both sides of the Berlin Wall that changed his life. “It was like night and day,” he recalled. “In the West it was children and families and smiles. In the East all you could see were guards with machine guns.”

Gil said, “I realized how fragile our freedoms are. My collecting hadn’t really fulfilled a need, but now I had a purpose. I wanted to show the greatness of America.”

Decades of collecting followed (“My motto,” said Gil, “was, ‘Never come home empty-handed'”) and in 1985 he opened the doors to the Miracle of America Museum. Gil was then 43 years old, and his museum has been open promptly at 9 AM, every day, ever since. 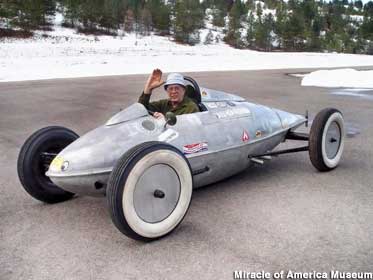 Gil made this speedster out of a fuel tank from a P-38 fighter plane.

By Gil’s accounting, the Museum currently displays over 300,000 artifacts, which he believes is more than you’d see in all of the other museums in Montana put together. If you could somehow view each item for only one second, it would still take you four days to see everything.

There are exhibits devoted to cherries and wool, and entire buildings dedicated to appliances and plumbing. “People like the common things,” said Gil, although a museum with this much stuff is bound to have a few surprises as well, such as a winged monkey from The Wizard of Oz, the largest dead bison in Montana (2,800 pounds), and a book signed to Gil by former Black Panther head (and FBI Most Wanted) Eldridge Cleaver. “He stayed in my home,” said Gil.

The Museum’s main building, filled with artifacts, would be enough of an accomplishment for most collectors. Not Gil. Its back door opens onto a five-acre village of over 40 additional buildings, packed with everything from snowmobiles to barbed wire. There’s a trapper’s cabin, a jail, a gas station from 1939, and a one-room schoolhouse with a three-hole outhouse. There are cars, trucks, tractors, snow plows, “Montana’s only historic large maritime vessel” (it hauled logs), a bomber from the Vietnam War that visitors can sit in, and an entire amusement park train.

World War II exhibit features a Nazi flag captured during the Battle of the Bulge.

“We have just about everything covered here,” said Gil.

The overstuffed nature and happy chaos of the Miracle of America Museum is part of its charm, although every visitor probably reaches a point where they simply can’t absorb any more. Gil said that the most common question he’s asked is, “Where did you get all this stuff?” He admitted that he sometimes finds items on display in his museum that he forgot he had. 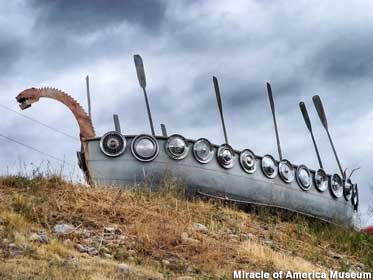 Unlike at similar mega-collections such as Harold Warp’s Pioneer Village and The Henry Ford Museum of American Innovation, Gil chose not to put his name on his museum. He wanted its focus to be on the miracle, he said, not on himself.

Gil’s beliefs are as much a part of the Miracle of America Museum as its restored soda fountain or blacksmith shop. A display of old scales, for example, features a placard praising America’s “balanced horizontal spectrum of government,” and warning that imbalance leads to either Tyranny or Anarchy. A DUI Victims Memorial, created by Gil, reminds visitors that, “our nation is built on freedom, and that entails responsibility if you’re going to drive.” Even the museum’s stuffed two-headed calf serves a larger purpose. “I tell school groups that the two heads fought over who would get the first taste of their mother’s milk, and they starved to death because they never learned how to share or take turns.”

We asked Gil why the museum’s collection stops in the 1960s, around the time of the miraculous moon walk. He said that, to him, the technology of the past 50 years “didn’t seem as ingenious,” and that visually, “there wasn’t the art.”

Gil’s own art surfaces in exhibits such as the “Alien Autopsy” quonset hut, which combines a tribute to the TV show M.A.S.H. with a display of medical equipment from a Montana state mental hospital. Gil built a Viking ship out of an old lifeboat with hubcaps for shields and a spike-backed dragon cut from a circular sawmill blade. He fashioned a “Flessie,” the monster of nearby Flathead Lake, out of mill ducting. “There is very good evidence that something is out there,” said Gil of the monster. “I’ve seen what I thought was the back of it, certainly something big and unexplainable.”

Gil views the Miracle of America Museum as an historical attraction, but it really is as much about Gil’s unflagging dedication as it is about the hundreds of thousands of items that he’s collected. “If a wagon master broke a wheel on the pioneer trail, he didn’t ask the government to help him,” said Gil. “They were individualists. I guess that’s what I am, too.”

more about The Miracle of America museum

Visiting The Mission Valley in Montana