Fort Connah is located in the Mission Valley of Western Montana. The Indians called the region “Sinyalemin”, meaning “The Surrounded”. One interpretation is that it refers to the surrounding Mission Range of the Rocky Mountains. The creek flowing next to the Fort is still called “Post Creek”.

The Post was planned in 1846 by Neil McArthur and finished in ‘47 by Angus McDonald for the Hudson’s Bay Company. It consisted of several small log buildings, a log corral and a bastion measuring 14 square feet. The main trade was in furs and the Post was an important link between forts on both sides of the Rockies. Dried buffalo meat, pemmican, buffalo fat, apishamores (saddle blankets usually of buffalo skin with the hair on), rawhide cords and hair cords were among the goods acquired. Sufficient quantities could not be obtained by HBC from any other Post on the west side of the Rockies.

After the northern boundary of the United States was established, the Post was ordered closed by the government. A Hudson’s Bay post within U.S. boundaries could not be tolerated. Thus, Fort Connah closed in 1871. 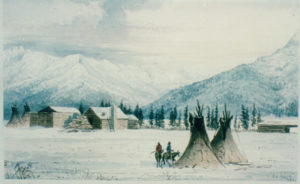 Though various factors had been placed in charge of Fort Connah, Angus McDonald is the most famous. He came from Scotland and was first assigned to the Flathead Country as an apprentice clerk in 1839. He was given charge of Fort Connah in 1847. He named the Post “Connen”, after a river valley in his homeland. An Indian named Francois Finlay had such trouble pronouncing this that Angus later contracted the name to Connah. Angus married a Nez Perce Indian woman named Catherine. Both are buried in a Victorian style cemetery located near the Fort Connah site.

Duncan McDonald, a son of Angus, was the last factor at old Fort Connah. He was born at the old Post in 1849 and at the age of fifteen years went into the Hudson’s Bay Company’s employ as a trader with the Indians. Duncan is known for being a capable businessman and for his written history of the Nez Perce War. He was capable of speaking twelve different Indian languages.

Fort Connah, the Hudson’s Bay Company post situated six miles north of St. Ignatius, is presently in the early stages of development as a historic reconstruction of the Rocky Mountain Fur Trade Period. Under the direction of the Fort Connah Restoration Society, established in 1975, the site is to be restored and refurbished to the period of the mid-1850’s.

The main building is still standing at the site. Besides being one of the original buildings, this log structure is of special interest as it is constructed of “Red River frame” or “post-in- sill” construction. This consists of upright logs at the corners, doors and windows, with horizontal, squared logs filling the spaces in between. This style of log architecture was common to many Hudson’s Bay posts. This building has been maintained and will be restored as close to its original 1850 appearance as possible.

In 2006, the Fort Connah Restoration Society was gifted three old trapper cabins. They were built in the 1860’s-70s. They had been located along the Flathead river near Dixon and were donated to the FCR Society by Rose Bailey. Two of these buildings have been relocated to the Fort Connah Historical Site and are being refurbished to somewhat replicate the buildings that were originally built on that site. The third building is being used as a museum- type display of an old trapper’s cabin and headquarters for public events promoting the history of the Fort Connah site.

In addition to restoration and reconstruction, plans call for erection of a public Interpretation Center and provisions for public parking. The usual visitor services, including guides, will be provided.The scale of the development is large and is the result of much work on the part of Mission Valley residents. It all started when a few persons became interested because of their concern that this historic site might soon disappear into oblivion. It is now apparent that the project will continue to grow and provide an authentic reconstruction of a period important to the Rocky Mountain Region.

Visiting The Mission Valley in Montana